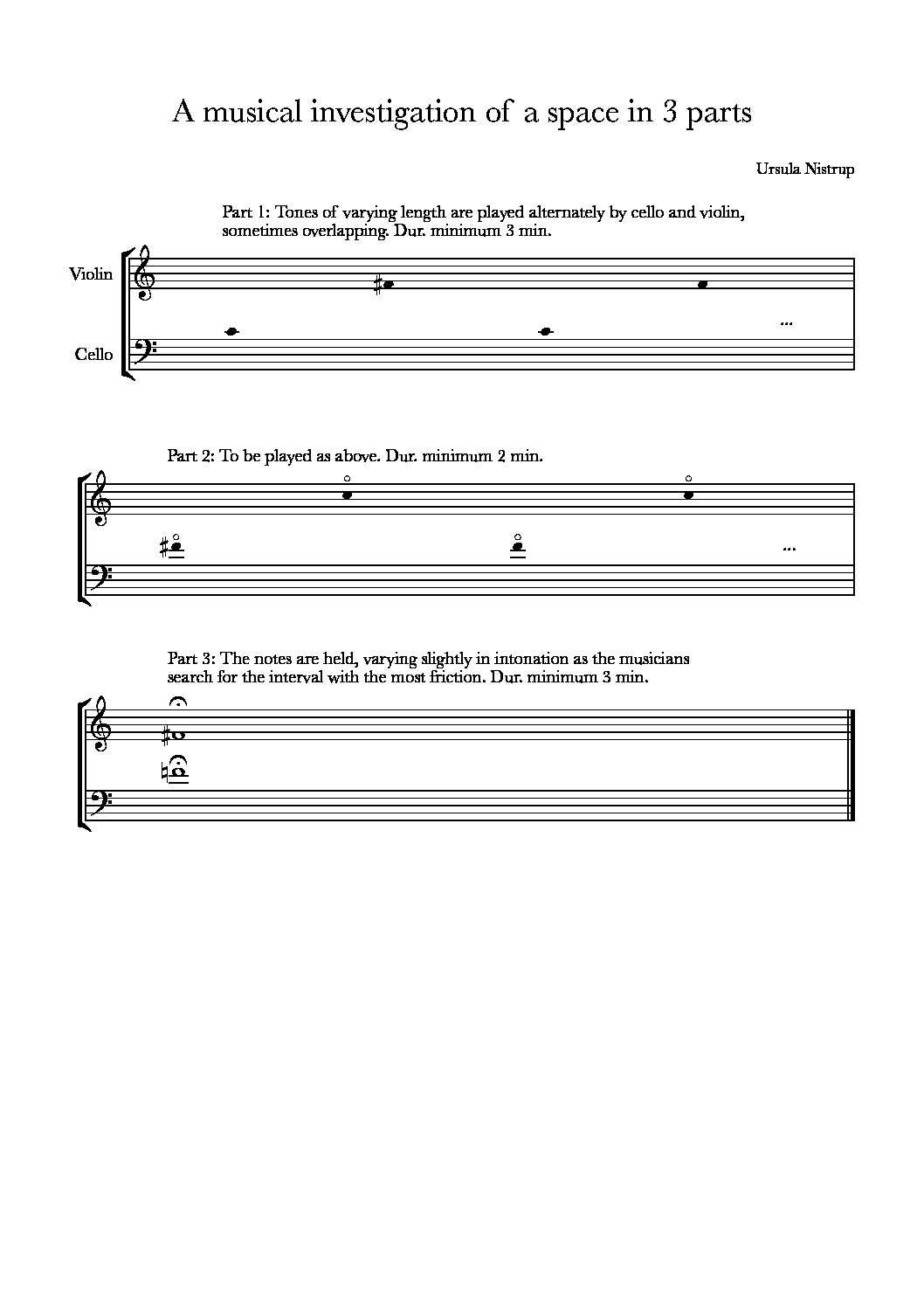 A musical investigation of a space in 3 parts, Sorø Art Museum 2014.

This composition was initiated by artist Ursula Nistrup, taking the form of a collaboration between herself and the cellist/ composer Cæcilie Trier, and artist/violinist Maria Diekman.

The project investigated a musical phenomenon known as the tritone interval. At various times throughout European history, the use of this interval was forbidden, including a period during the Middle Ages when the interval was referred to as the Devil’s interval, because it was slightly disharmonious. It was then believed that beautiful harmonious music was one of the most direct ways to communicate with God and due to the tritone’s somewhat disharmonious quality, it was regarded as a device to communicate with the Devil. It was also believed that listening to these unholy tones could provoke the sexual lust in people.

This musical composition is based on the tritone. It has been developed by means of a series of experiments and tests in the exhibition space of Sorø Art Museum, which is constructed entirely of concrete and therefore has very lively and challenging acoustics. The acoustic qualities of the space are themselves a key factor in the composition itself.

When composing this piece, 4 factors were considered:
1/the acoustic qualities of the two string instruments,
2/the distance between them,
3/the positioning and number of audience members and
4/the physical qualities of the concrete surfaces constituting the space in which the piece is performed.

Please enjoy the musical investigation of a space, Sorø Kunstmuseum 2014

Part One.
In the first part of the performance, the tritone pair which we found worked best in the specific space, C / F#, are played as individual tones by a cellist and a violinist. The cellist sits statically on a chair in one part of the room. The violinist stands at the far end of the room. The distance between them is approximately 25 metres and they maintain eye contact. They play the two tones in such a way that the tones seem to call to each other; intermittently the ends of the notes overlap in such a way that their echoes can be heard, forming a kind of third tone as a bow formation in the physical space between the two musicians.
Duration: minimum 3 minutes.

Part Two.
This section is almost soundless. The two musicians now play the tones (C / F#) as harmonics, which are rich in overtones. They play as quietly as possible, so that only occasionally the tones can be heard, and then just barely.
Duration: minimum 2 minutes.

Part Three.
For this section we have listened to and tested tones in the space. One of the reasons for the use of the tritone having been prohibited in the past was the fact that it can produce a sense of discomfort in the listener¬¬ ‒ and this was what we wished to capture. Given the physical elements constituting the room, its large concrete walls and surfaces, we found that the minor second interval consisting of the F and the F# was the most unpleasant-sounding interval. When playing this interval and moving through the space, it was possible to detect that the tones vibrated together.
In Part Three the two musicians intermittently play the tones of this new interval. While increasing the intensity of the tonal volume, the violinist also moves towards the cellist, still sitting at the far end of the space from her. This way the sound becomes nuanced due to the physical movement, the directions of the sound waves and the intensity generated between the two musicians.