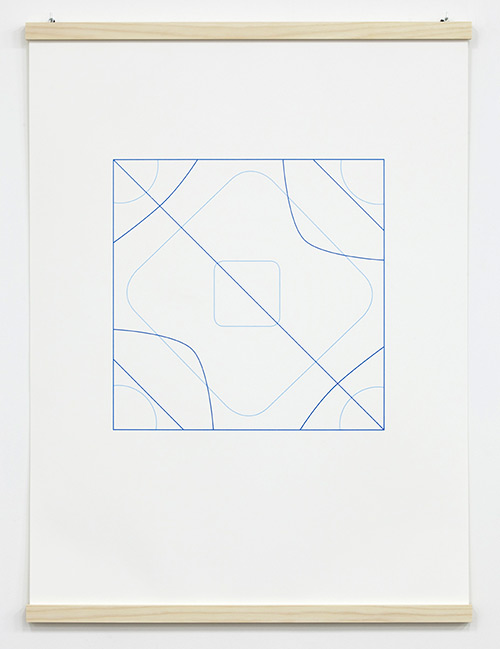 Patterns of Dissonance comprises six silkscreen prints produced by using a hundred-year-old technique called cymatics. Cymatics is the study of sound and vibration made visible, typically on the surface of a plate or membrane. When a tone vibrates through a resonant membrane, the membrane will vibrate in relation to the frequency of the tone passing through it, allowing materials such as sand or water to form geometrical patterns. Patterns of Dissonance was produced by attaching a tone generator to a metal plate covered by a thin layer of sand; each tone produced by the tone generator in turn produced distinct geometrical patterns.
Each silk print consists of two such patterns printed on top of each other. The two tones of each print have a six half-tone interval between them. This interval is called a tritone. In the Middle Ages, tritons were banned by the Church due to their disharmonious character. While harmonies were thought to be the most direct way to communicate with God, disharmonies were believed to correspond with or indeed worship the Devil.
A set of 6 Riso prints accompanies this series. The display examples of famous and infamous music composed with tritones as a main component. Furthermore, they testify to the importance of disharmony for the development of blues music, which constitutes the basis for contemporary rock and pop music.
The tritone A-Eb appears in the blues composition Me and the Devil Blues (1937) by the legendary blues musician Robert Johnson. In the lyrics, Johnson expresses the belief that he had an evil mind and a sense that some evil power outside himself – the Devil – was responsible for his violent behaviour towards his woman. In the song, the narrator wakes up one morning to the Devil knocking on his door, telling him “it’s time to go”. The narrator does not seem to be repentant of his actions and ends the song by singing “You may bury my body… So my old evil spirit can catch a Greyhound bus and ride”.

The plant Indigofera tinctoria offers an etymological explanation for the origin of the “blues”. The plant was used by many West African cultures in death and mourning ceremonies in which all the mourner’s garments were dyed blue to indicate suffering. This mystical association with the indigo plant, grown in many southern US slave plantations, combined with the West African slaves who sang of their suffering as they worked on the cotton that the indigo dyed – is thought to be the origin of the term ‘the Blues’.